Tara – Queen of the Touargang 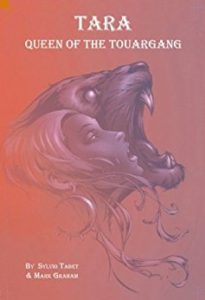 TARA, QUEEN OF THE TOUARGANG
By Sylvio Tabet & Mark Graham

Tara, Queen of the Touargang is a fantasy epic set in a time of war and rebellion, sorcery and swordsmanship, and inevitable change.

When evil forces plot the overthrow of the Great Expanse, one tribe stands its ground and one proud warrior finds her world forever transformed.  As her people fight for their very existence, eighteen-year-old Tara, heiress to the throne of the nomadic Touargang, is captured by the spell of the evil sorcerer Marsala.  Part panther, part woman, Tara comes to recognize that she will only recapture her true nature when she overcomes the struggle between the beast within and the messenger of peace and love that she is destined to become.

Tara is not alone in her struggle. Always there is her family: Om, a tiny wizard who is Tara’s lifetime spiritual and martial arts gun; Pouf, a mischievous chimp who is far more trouble than help; Diva, the snow-white Arabian who has been Tara’s faithful companion since childhood; and Tolga, the dashing Vedanta who wins her heart.

As war spreads throughout the Great Expanse, Tara and the Black Panther forge an alliance within one body, and their legend is born. Together, they turn the tide of the war, and Tara discovers the strength of her own humanity.

While Tara embodies the good in the universe, evil is represented by Marsala. She symbolizes compassion while he personifies greed and jealousy.  Their meeting is predestined.  While one may triumph, the other always remains.  In the end, Tara and her family are reunited.  The balance is restored.  The will of the gods reigns true.   Peace prevails, and a new hero is born.